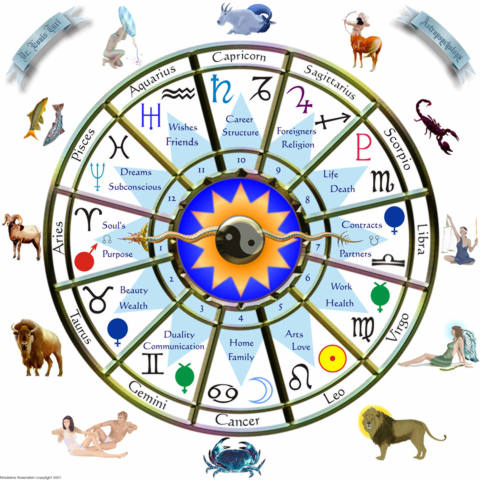 Here we are once again with a new variety of predictions for your dining, dancing, and listening pleasure.

The Celestial Sphere has portioned out just enough horror to make your lives slightly unbearable, but perhaps a little laughable.

Sorry, but we just bring you the facts, straight from the freshest charts available, right to your table for your weekly consumption.

As they say, (whoever they are), “All is fair in love and astrology”.

Aries… Pluto is in its seventh house getting rid of a flea problem. In the future, you will be fined by the Library of Congress, or an actual congressman, for an overdue book.

Taurus… Uranus is on the cusp of Taurus now, but wants to be in opposition. In the distant future, you will either flagellate or fluctuate. Either way you are in for a rough ride.

Gemini… Saturn is in its seventh house replacing some windowpanes after a meteor shower. In the future, you will seal the deal when you sell seven seals to someone named Lucille.

Cancer… The Moon is in Cancer now and feels a bit uncomfortable about it. In the not too distant future, you will fall in love with either a carrier pigeon, or some carrion. Either way it will be a smelly situation.

Leo… The Sun is in its fifth house polishing the silver. Sometime in the future, you will finally get your ducks in line, and then someone will cut in front of them ruining the moment.

Virgo… Mercury is in its seventh house talking to an interior decorator. Not too long from now, you will find true happiness renting out jowls for a living.

Libra… Saturn is in Libra now and is anxious to leave for some unknown reason. Watch out for those pesky blue lights. Sometime in the future, you will purchase one of those personalized license plates. You will mistakenly order it with the letters, “IMDRUNK” on it.

Scorpio… Neptune is descending into its third house now. It doesn’t know that it forgot the house key. Get ready for some elbow pain. In the future, you will have the urge to salute all trees, and shrubs.

Sagittarius… Venus is trine with Sagittarius at this time. In the future, you will become famous for your ability to make Cumquats squat.

Capricorn… The Earth is square with Capricorn at this time and approaching trine. In the future, you will have the urge to fertilize your ear buds, or Dennis Miller.

Aquarius… Jupiter is aligned with Mars now and loves it. In the future, you will have the urge to enroll your old stretch pants in a yoga class.

Pisces… Mars is aligned with Jupiter at this time. In the not too distant future, you will make your bulky, knit sweater go on a diet.

And remember what Weird Al says about astrology in his song, “Your Horoscope For Today”: