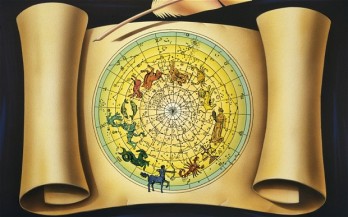 Welcome back my friends.

We have worked out another week’s worth of charts just for you.

They may not be peasant, but they are free.

What more could you ask for?

Yeah, yeah, yeah, you could ask for money, good health, or fame. But then it wouldn’t be a HORROR-Scope would it?

This weeks gathering includes, a stopwatch, sushi, and the ever popular, scary clown.

Aries… Uranus is super-trigenital to Aries now. That can cause trouble. In the not too distant future, you will toil near a toilet at a toy land in Thailand. It would be wise to have a lot of deodorant with you. It will be hot, sweaty, and very uncomfortable.

Taurus…Mars is in projected di-urinal now. That’s terrible. One day, you will try to become a sugar artist, but you wind up being a mashugana instead. You will be mocked. It won’t be pleasant.

Gemini… Mercury is at post hyperion at this time. That spells trouble. Sometime soon, you will lose a valuable stopwatch somewhere at a stop sign. Then, you will pull out all the stops to find it, but it will be in vain. You’ll cry a lot over it as time marches on.

Cancer… The Moon is di-hyperble now. That’s always a bad sign. One day, you will make a wish for a candy dish, but end up with a fish. A dead, smelly one. Yuck!

Leo… The Earth is super-trigenital at the moment. Oh boy, look out. In the distant future, you will start a new business making sushi out of shoes, hoping it will be the new “Sole Food”. The Board of Health will close you down. You’ll lose everything.

Virgo… Venus is trans-jected against Virgo now. That means trouble. Someday, you will wobble, then gobble on some cobblestones. You will fall down and suffer minor injuries.

Libra… Saturn is in projected di-urinal now. Better be careful. When you least expect it, you will begin to wilt while walking on stilts that are not well built. They will beak, and you will break something.

Scorpio… Pluto is in counter-objection to Scorpio at this time. That is an indicator of trouble. Not long from now, you will be surprised when you meet some minions with opposing opinions. An argument will ensue. It won’t end well for you.

Sagittarius… The Sun is post-conjected at this time. That’s not good for you. One day you be considered a model citizen, however you will be arrested for modeling nude in public.

Capricorn… Jupiter is tri-orbital to Capricorn now. That’s never good. In the far, far, future, a band of roving clowns will stalk you. You will be terrified and have nightmares for months afterwards.

Aquarius… Mars is in Aquarius and it’s furious. That’s always bad. In the distant future, you will open a food truck to serve fried rat on a stick. It will be in vain when the rain destroys your propane. The Board of Health will close you down.

Pisces… Uranus is trans-jected against Pisces now. That foretells problems. Sometime in the future, your enemies will attempt to digitize you. It will be painful, but you will survive.

And…remember what Weird Al says about astrology in his song, “Your Horoscope For Today”: